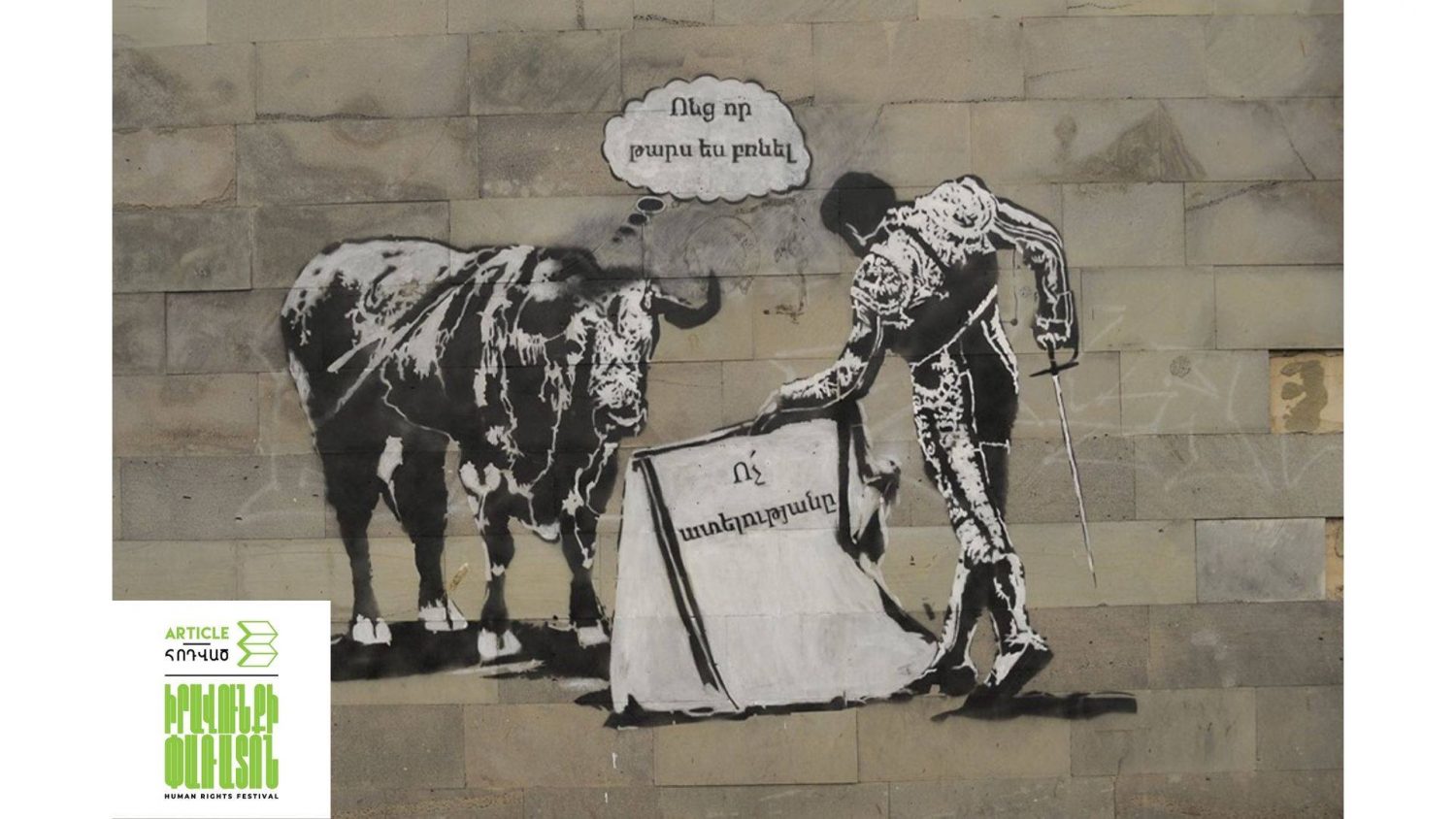 If You Hate, Then You’ve Been Defeated

Why did the ‘word’ become speech and what is the difference between speech and language? Why did the culture of speech acquire shades of hatred and why does it aim to discriminate? In ancient Armenian grammar “բան” (“ban”) means speech or speak. For instance, the word “բանբեր” (“banber”) means somebody who brings speech. Speech is the specific individual realization of language which is a common system of communication, such as of sound, gestures, or written characters. Clearly we can convey any thought or idea through speech. Thoughts are often targeted, which is not desirable in the case of hate speech. First of all, what is hate speech and where does that delicate problematic border between freedom of speech and hate speech lie?

During the interview with human rights defender Arman Gharibyan we clarified a couple of questions in regard to hate speech.

“Hate speech is any written or verbal speech or even any other kind of speech manifestation, e.g. paintings or music, which expresses a very negative attitude or incites hatred toward an individual or group of individuals, based on religion, sex, gender identity, national characteristics, sexual orientation, disability and other social factors’, the human rights defender mentions, adding that there are four types of hate preaching: incitement, dissemination, encouragement and justification.

“Freedom of speech is not an absolute right and it shall be subjected to restrictions. Hence, the state should restrict the freedom of speech in all cases where it harms third parties or violates their rights. This is also enshrined in Paragraph 2 of Article 10 of the European Convention on Human Rights: it provides that one of the grounds for this kind of restriction is the aim to protect the rights of others. Therefore freedom of speech cannot be protected and the state can and shall restrict it in all the cases when it fits into the above mentioned definition of hate speech, i.e. it incites hatred or it expresses a very negative attitude towards a person or a group of people based on the above mentioned factors.

We shall now refer to the European Convention on Human Rights. Article 10 of the Convention establishes the right to expression:

“Everyone has the right to freedom of expression. This right shall include freedom to hold opinions and to receive and impart information and ideas without interference by public authority and regardless of frontiers. This Article shall not prevent States from requiring the licensing of broadcasting, television or cinema enterprises.”

The second part of the Article is about restrictions and penalties. “The exercise of these freedoms, since it carries with it duties and responsibilities, may be subject to such formalities, conditions, restrictions or penalties as are prescribed by law and are necessary in a democratic society, in the interests of national security, territorial integrity or public safety, for the prevention of disorder or crime, for the protection of health or morals, for the protection of the reputation or rights of others, for preventing the disclosure of information received in confidence, or for maintaining the authority and impartiality of the judiciary.”

In this section, we can talk about the international experience of combating hate speech. Are there countries that restrict hate speech? Arman Gharibyal talks about this:

“Hate speech is restricted in a number of states, in some of them it entails criminal liability, in others administrative penalties. For instance, in 2011 a court in South African Republic banned the performance of a song with the title “Dubula Ibhunu”. Please note that it was just a song. Its title translates as “Kill the Boer”. Boer is the name given to an ethnic group of Dutch origin living in South Africa”.

The court banned the song since it preached to murder the people belonging to that ethic group.

The examples of states can continue. Inciting hatred or hostility, as well as humiliating a person or a group of people based on sex, race, origin, religion, and one’s belonging to a certain social group, is prohibited also in Russia. In this case it is punishable with a fine. In Finland it is prohibited to publish any information or opinion that threatens or offends any group, based on race, nationality and ethnic origin, religion or beliefs, sexual orientation or disability. The punishment is a fine or imprisonment with a term of up to 3 years.

In Denmark, a public statement that threatens, insults, or humiliates any group of people on the basis of sex, race, ethnicity, sexual orientation or beliefs is prohibited. It is punishable by a fine or imprisonment with a term of up to 2 years. In case of Chile any kind of public statement in any way of social communication intended to incite hatred towards any person or a group of people is punished with a fine. This list of countries is not exhaustive. This is just a series of examples from different continents to show that the fight against hate speech is not a single geopolitical approach.

It is important to speak about incitement of hatred as well. This does not necessarily contain a call for violence or other criminal acts.  Attacks with insult, slander and ridicule against certain groups of society may be sufficient for the state to combat the irresponsible use of speech. In this regard, the court considers discrimination based on sexual orientation to be as serious as discrimination on the basis of race, origin or skin color.

We shall now speak about the situation in Armenia. Abuses related to hate speech are widespread in Armenia, e.g. in the media field or on social networks, particularly on Facebook. Too often people do not have sufficient level of media literacy to make use of media or social networks and this is one of the causes for the spread of hate speech. The spread of hate speech on social media and traditional media is mostly based on the words of others. In other words, there are few journalists who spread the word of hatred themselves, but this does not mean that there are no such journalists at all. In regard to hate speech, media should be held accountable.

It’s curios that in accordance with the RA Criminal Code both propaganda of hatred and incitement of hostility are forbidden. Yet, those groups that should be among the protected ones are not included or are not fully protected. Hence, we need a law on hate speech. If you belong to a specific group and that group has been insulted, you cannot apply to court with an RA article on insult, since in accordance with the latter the insult has to be direct and targeted, i.e. it should be addressed directly to you, so that it can be punished by court. While in case of a law on hate speech the whole group is under protection and anyone belonging to that group can protect their rights. This differentiates hate speech from insult.

Hate speech is spread generally on the Internet and towards the groups who are not so much protected. Yet, a person can be insulted on the Internet and not only even for their political views. Unfortunately, the current authorities are not doing anything to impose sanctions. Moreover, at some point hate speech was even encouraged: it was simply not hatred in the classical sense: it was not directed against a person purely on the basis of belonging to a certain group. For instance, former authorities have been subjected to hate speech or verbal violence for their political or party affiliation, and this continues up to this day. Yet, belonging to a political party is not among the grounds for protection and the former authorities cannot expect any protection.

Thus, we will now try to briefly present what legal and public gaps and issues concerning hate speech we can come across in Armenia:

The gaps are numerous and the state has much work to do in order to eradicate hate speech at the state and public levels. Here it is important to remember the words of Confucius. “If you hate, then you have been defeated.”